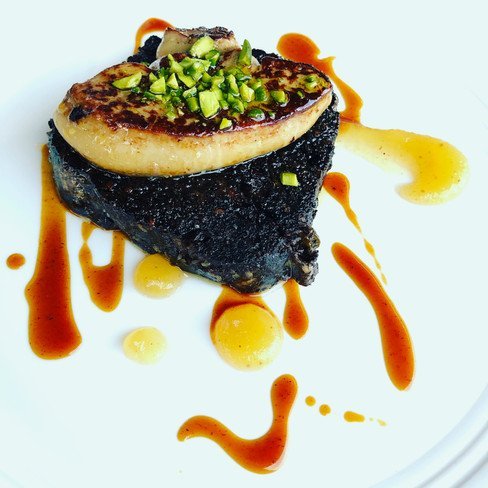 Can’t stop talking about the housemade black pudding topped with foie gras and a sprinkling of pistachios I was served at Vaughan’s Anchor Inn the other night. What an amazing combination of flavors and what a stunning dish to look at. The combination of blood sausage and duck liver has a Fergus Henderson sort of vibe about it. Henderson, as you may recall, is the British chef who brought us the “Nose to Tail” eating movement and famously cooks up all sorts of innards and offals at his St. John restaurant in London.

Anyway, it’s not the sort of appetizer you’d expect to tuck into after a rough and tumble fishing trip to Lahinch beach and Liscannor pier. 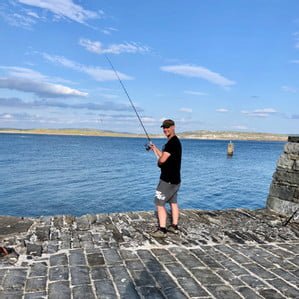 This stellar dining experience started out as a fishing trip. I had promised Iain Millar, my fishing-obsessed guest from Manchester, an angling excursion. To that end, I contacted the noted Irish fishing guide, Alan Griffith. Alan usually takes anglers out in a boat for freshwater fishing, but when I asked him where I could go saltwater fishing with Iain, he came up with another idea.

Alan said he had always wanted to fish the little river that flows into Liscannor Bay along Lahinch Beach. If we wanted to join him, he’d be glad to have the company. The only fee for his guide service was dinner at Vaughan’s Anchor Inn. I gladly took him up on this offer.

Alan had never been down to the river before and he proposed we jump a barbed wire fence and cross a pasture to get there. Seemed easy enough,  so over we went. But it was a long drop down a stone wall covered with blackberry brambles on the other side. I was wearing shorts and my legs were soon oozing blood from all the scratches. The pebble beach on the riverside was a lovely spot, though we didn’t catch any fish. After the river, we tried out luck at Liscannor pier.

By dinnertime, we looked a little battle-weary, what with our bloody legs and muddy hiking boots. And Vaughan’s was much posher than I expected a pierside pub to be. (The first section of the menu is dedicated to caviar service!) But I was delighted to discover that there were picnic tables set up outside. 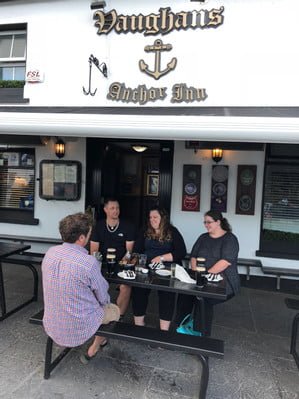 Iain ordered the fish & chips, which may have been the most impressive version I have ever seen. 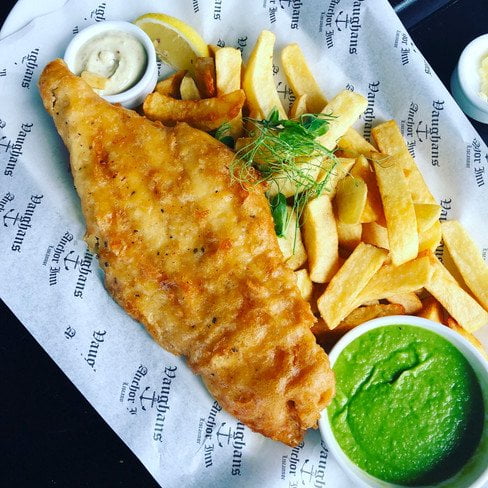 The fish was a huge piece of cod and it was dipped in a sourdough starter that had been fermenting continuously for nine years. The chips were hand-cut and steamed, then fried in a beef fat. There was housemade tartar sauce and a small bowl of pureed fresh peas rather than the British-style mushy peas that might be expected.  Now that’s an upscaled rendition of the old classic.

That’s not the only fish on the menu. 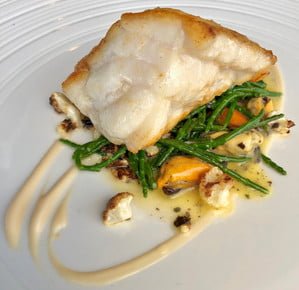 I had the roasted monkfish on a bed of mussels, roasted cauliflower and samphire with a cream sauce–another stunner. The monkfish was perfectly cooked so it was quite moist in the middle. The marsh samphire has an asparagus sort of flavor and a wonderful crunchy texture–much different from the delicate rock samphire I collect on the beach behind my house.

On the dessert list, there’s an intriguing combination of bread pudding and brown bread ice cream. 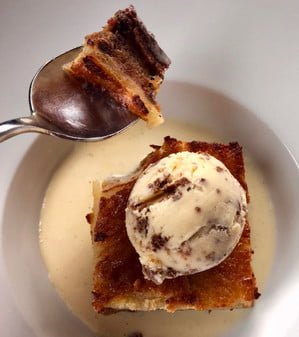 Vaughan’s is a family run restaurant that’s been around since 1979. Annette and John Vaughan run the place and their talented son Denis runs the kitchen. Chef Denis Vaughan is entirely self-taught and his cooking is amazing. I hope to have a pint with the chef some night to learn more about his ideas and inspirations.