Citrus-cured trout with turmeric-tinted pickled cauliflower and vivid violet garnish started off a lovely Friday evening dinner at Barrtrá, a seafood cafe in Lahinch. After months of home-cooking and takeaway during the interminable Covid-19 lockdown, what a pleasant shock it was to be sitting in a restaurant again. We had to sanitize our hands on entry, our table was far from any other, and the waitstaff were wearing masks, and we were thrilled! 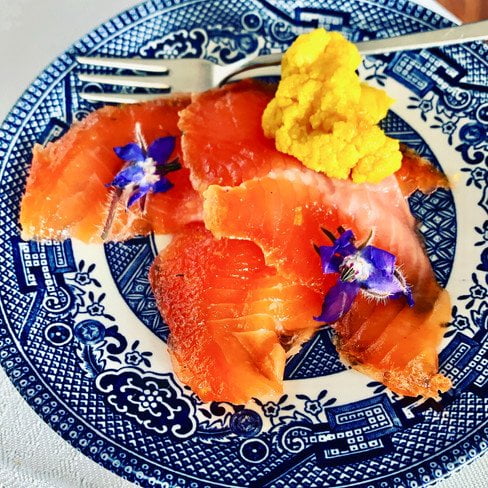 Barrtrá sits on a cliff overlooking Liscannor Bay. What looks like a homey residential cottage from the outside is nicely fitted out as a cozy cafe inside. It’s an unpretentious little “steak and seafood” joint with rambling vegetable and herb gardens, a conservatory dining room, quirky decorations, and appetizer plates made up of mismatched remnants of old chinaware sets.

There’s an à la carte menu and a prix fixe list to choose from. We ordered the “Seafood Surprise” dinner–several courses of the chef’s favorites for a set price. (There’s also a Meat Surprise and a Vegetarian Surprise dinner.)

Our second course was a selection of New Quay oysters on the half shell and a dish of chillied lime squid. The spicy sauteed squid came with a triangle of seasoned lime on the side. The bit of lime reminded me of the intense, salty-sour preserved lemons and limes that are common in Persian cooking and popular in many Middle Eastern cuisines. It was an inspired combination. 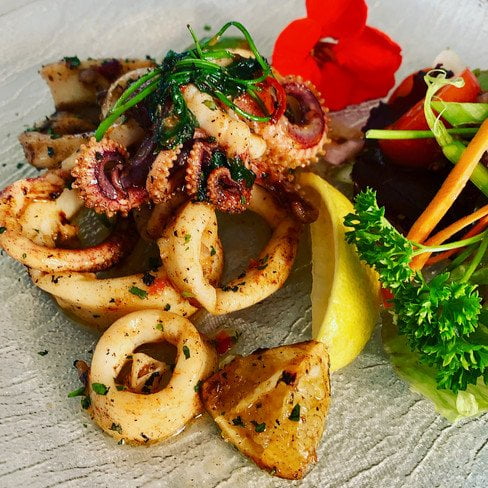 Barrtrá was founded in 1988 by Paul and Theresa O’Brien. Their son Ruben O’Brien worked as the head chef for many years. For the last five years, he has run the operation. The current chef is Jordan Dexter, an Australian whose parents once ran a Lebanese restaurant down under. 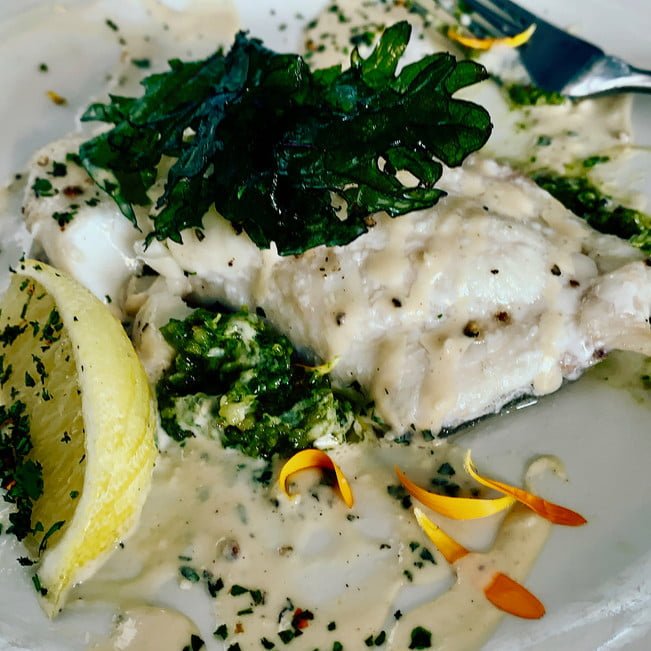 My main course was a stunning dish of John Dory in tarator sauce topped with crispy seaweed. I had never heard of “tarator” sauce and had to ask the waitress to spell it for me. After giving it a Google, I realized it was the same tahini, lemon, garlic blend I have been eating on my shawarma sandwiches for years. In Houston Middle Eastern restaurants, it’s just called tahini sauce. I make it at home quite often and serve it with grilled lamb kefta kebabs. I never thought of serving it with fish, but now I am inspired to try it.

A poignant reminder of what we’ve all been missing–going out to restaurants and learning new things about food from talented chefs.

You expect thirty-something-year-old Irish restaurants to stick with tried and true formulas–how refreshing to find one that’s pushing the envelope. Barrtrá’s version of local seafood with a Middle-Eastern twist is an fine example of the quiet evolution going on in the Irish cuisine of the 21st century.