Bars that call themselves Irish have long been popular in the United States. From hokey suburban shopping center beer joints, to elaborate reproductions of old pubs that have been transported piece by piece from the Old Country, America has its share of Irish bars. While judging their relative merits, the subject often turns to authenticity. But its easy to forget that some of the oldest drinking establishments in the U.S, including McSorley’s Old Ale House in New York (1850s) and McGillin’s Old Ale House in Philadelphia (1860s) are Irish bars too, and they aren’t imitations of anything.

Here’s a report on an Irish bar in the U.S. that recently caught our interest: 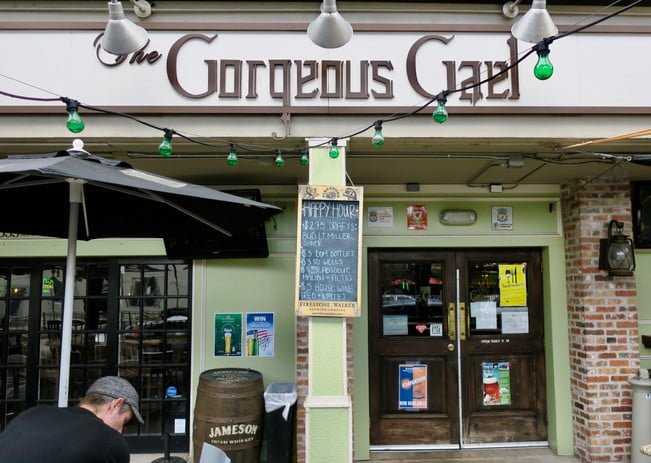 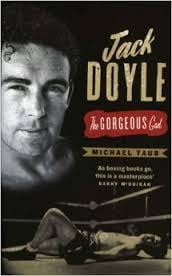 “The Gorgeous Gael,” an Irish bar located at 5555 Morningside Drive in the Rice Village neighborhood of Houston, Texas, took over a space formerly occupied by Brian O’Neill’s Irish Pub. The interior was completely redone before the place got its new name.

Brian O’Neill was the High King of Ireland from 1258 to 1260. The new moniker is a nickname for a flamboyant native son of Cork, Jack Doyle, a prizefighter, singer and Hollywood actor who lead a charmed life full of wine, women and song.

After winning a long string of fights, he began singing in concert halls, then moved to Hollywood and appeared in a few movies. He squired an endless procession of beautiful women including starlets and heiresses. He once decked Clark Gable in a fight over Carole Lombard.

“A generous man never went to hell,” was Doyle’s slogan, and when he entered a bar, he was said to hand a few hundred to the bartender to buy a round for the house. Just the sort of guy you want to name your pub after!

Irish publican Peter Kingston and his partners came up with the Jack Doyle theme. There are photos of Doyle on the walls of the bar and more in the menu. All of the bar’s signature cocktails are named after episodes of Jack Doyle’s life.

One such libation called “Down Goes Gable” is a mixture of Jameson Irish Whiskey, Lillet Blanc, Cointreau and Orange Bitters and sells for $12.

Peter Kingston was in the bar business in his hometome of Cork before deciding to move to Houston three years ago when he was offered a chance to invest in the makeover of this Texas Irish bar.

The clean and modern lines of the bar’s new decor are a clear departure from the atmosphere generally associated with the Irish pub concept.

As attached as we may be to the image of a dark Irish pub with mahogany-stained wainscoating, cozy snugs, and antique furnishings, there is a case to be made for this new sort of clean and modern Irish bar.

You can’t fault the authenticity: This is exactly what many of the bars opening in Ireland look like these days. Its a refreshing change to see a modern, well-lit Irish bar in the Texas. The lord knows, we have enough imitations of the old-fashioned dark and ancient pubs to go around. 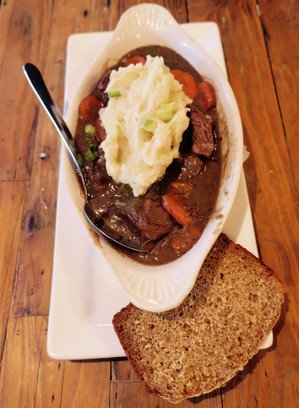 The Gorgeous Gael’s website calls the place a “gastropub,” which would seem to promise an ambitious menu. The multicultural bar snacks includes Hummus, Bruschetta, and Sliders along with the usual Calamari, Quesadillas, and Fried Pickles. There are also a few interesting twists like “Confit Chicken Wings” and the fried potatoes with toppings called “Irish Nachos.”

From the entree list, I tried the Irish stew which was quite pleasant. Large chunks of tender meat stewed with carrots and onions were cooked in a gravy and served with a generous scoop of champ, a favorite Irish combo of mashed potatoes and butter softened scallions on top.  A slice of Irish brown bread came on the side.

The dish was the mirror image of the Irish stew I ate at the Brazen Head, the oldest pub in Dublin, this Spring, except that it was made with beef rather than lamb which is understandable as lamb stew is a hard sell in beef-loving Texas. 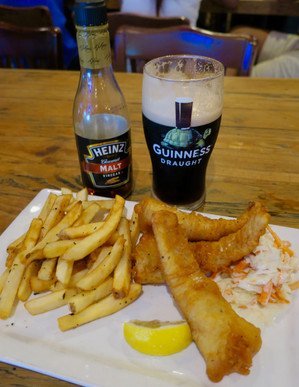 I also sampled the fish and chips, three strips of cod and excellent french fries which I doused with Malt Vinegar and washed down with a Guinness.

The fish was quite good by Houston fish and chip standards, but a far cry from the crusty-coated giant piece of cod you get at a Dublin “chipper.”

Oh well. Maybe its inevitable that a visit to an Irish bar in America is going to make you nostalgic for Ireland.

An Irish tale often seems to have a sad ending, and such is the case with the legend of Jack Doyle. He died broke and homeless in 1978.

But what a life he lived!