I recently published an article on Irish BBQ over on my site ZenBBQ.com. You can read it here, or click here to check it out over on Zen BBQ.

The Pitt Bros Barbecue Test Lab is a repurposed shipping container in the incredibly hip EATYARD, a gathering spot for food trucks and other street food vendors in Dublin. Pitt Bros BBQ restaurants has two brick and mortar locations plus the food stand at EATYARD, making it the largest barbecue chain in Ireland.

The menu at the BBQ Test Lab featured buttermilk fried chicken and fried chicken with waffles. The only barbecue on the menu was a pulled pork sandwich. 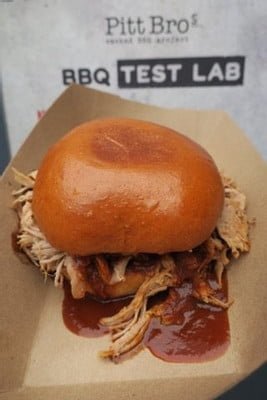 The pulled pork was smoked in the restaurant’s honest-to-god Texas-style smoker, the vendor told me.

I bought a sandwich and gave it the sniff test. The meat had no smoke aroma. And there was no juicy fat either. It tasted like dry roast pork with sweet barbecue sauce poured over top.

What brand of barbecue pit they were using, the man inside the box couldn’t say. European barbecue folks, including the Irish and the Germans, are working on their own designs for barbecue pits. They have come up with lots of innovative rigs–including the new-fangled vertical barbecue barrel that’s becoming popular with home cooks in the U.S. 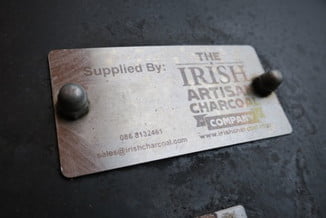 To give their barbecue a fair test, the guy behind the counter insisted I had to try one of the original Pitt Bros locations. There was one a mile or so away on George Street, he told me.

I went to the Pitt Bros mothership a few days later. After standing in line, I ordered a three meat plate with two sides and was given a number to display at my table so the food runner could find me. The barbecue was served on a cookie sheet lined with paper–the Texas urban barbecue style of presentation has evidently gone international. 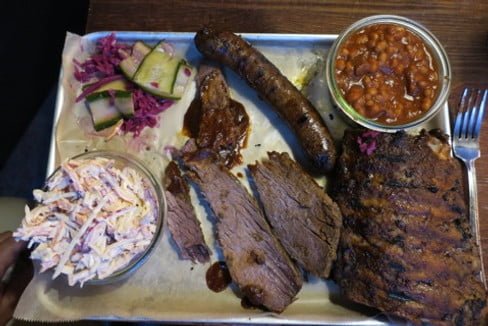 The pork ribs were pretty good. The beans and coleslaw were just fine too. And I have to say, the Irish custom of serving pickled red cabbage along with pickles and onions is worth emulating elsewhere. I like sweet and sour red cabbage on a barbecue sandwich better than slaw.

But the brisket was a horrible mess–badly sliced and as dry as mouthful of cardboard. As for the link–Ireland produces some great artisanal sausages, sadly this wasn’t one of them. The link was stuffed with some finely ground meat mixture that had been badly overcooked.

The menu stated that the restaurant had a custom-made American smoker. The manager wouldn’t show me the barbecue pit when I asked to see it. This is a sure sign that the establishment has something to hide. He came to the table when I requested a word with him.  I guessed they were using a pellet smoker and he confirmed my suspicion. It was a Cookshack pellet smoker he said.

The Campaign for Real Barbecue, the organization that certifies barbecue joints that cook with wood in the Southeast part of the USA, includes pellet smokers in the wood-burning category as well as units the burn sawdust. Since they are trying to challenge “barbecue” restaurants that don’t use any woodsmoke at all, the broad definition is understandable.

Pellet smokers have their fans, apparently people are winning barbecue competitions with them. But as far as I know, no credible Texas barbecue joint uses one. Texas barbecue purists are even skeptical of “gassers,” gas and electric powered smokers that use minimal wood, like those from Southern Pride. Pellet smokers are a rung below that. None of this equipment can impart the sort of smoky flavor you get with a barbecue unit that burns hardwood logs.

The interior design of the Pitt Bros BBQ restaurant was very impressive–if you take that sort of thing into account when judging barbecue. Although I have to ask: Is a barbecue joint like Pitt Bros that displays stacked cord wood in the dining room while cooking with sawdust pellets in the kitchen engaging in false and deceptive advertising? 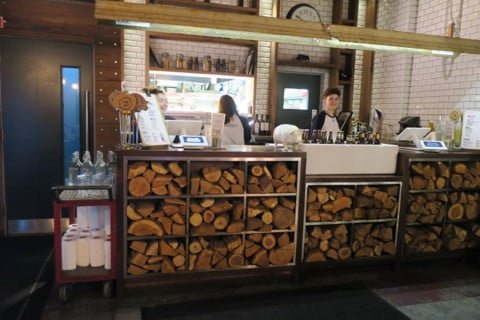 I made the mistake of calling the menu a Texas barbecue assortment. The manager told me that the restaurant wasn’t intended to be a Texas-style barbecue venue. It was supposed to be North Carolina style. Brisket and sausage in North Carolina? I wondered out loud. 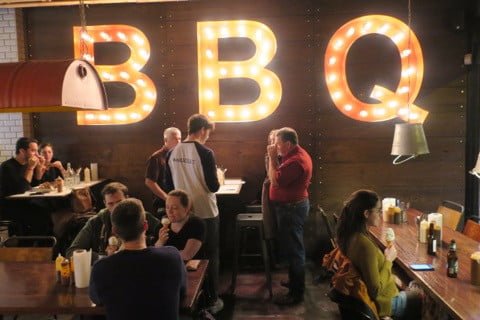 Pitt Bros was started by two Irish brothers who visited a barbecue restaurant in Charlotte, North Carolina while attending a wedding. They liked the food so much, they went back several times. The menu at Pitt Bros Dublin emulates the Charlotte barbecue joint they were so impressed with, the manager said.

I sat there for a moment slack-jawed as I considered the irony. A barbecue joint in Charlotte that served brisket and sausage? That sounds like Midwood Smokehouse, a Texas-style barbecue joint created by an innovative restaurant entrepreneur named Frank Scibelli.

It’s quite possible that this misrepresentation of North Carolina barbecue in Dublin is partly my fault. So let’s not be too hard on this earnest endeavor. In truth, I’m glad to see any kind of barbecue in Ireland. And at least they aren’t roasting pork in a gas oven, slathering it with sauce and calling it barbecue like so many barbecue joints in North Carolina.

The fledgling Irish barbecue business is on the bunny slopes of the learning curve. At present, there are something like a half dozen barbecue joints in Ireland. Pitt Bros is the most successful. Let’s hope that one of these days they invest in a J&R Oyler smoker, like the one used at Midwood Smokehouse in Charlotte, the incredible Killen’s in Houston, and all the best barbecue joints in Europe.

“European food safety authorities are never going to allow the kind of steel pits or brick pits that we use in Texas,” Daniel Vaughn, barbecue editor of Texas Monthly told me after a tour of Europe. “That’s unique to our culture and its never going to translate.” The only barbecue pits European authorities are going to allow for use in a restaurant are brand name metal boxes with UL seals of approval. There are lots of barbecue units on the market, but of the ones that actually burn logs, J&R Oylers are the most popular.

The fact is, European barbecue is on the rise. Barbecue restaurants like The Beast in Paris are turning out honest-to-god barbecue using a J&R Oyler pit, Vaughn told me. Another barbecue joint in Paris called Melt also has an Oyler pit, and is looking to give the Beast a run for their money. Vaughn reports there is also authentic Texas barbecue in Denmark and Sweden.

Make no mistake: European barbecue, Australian barbecue and the barbecue of the rest of the world is the next big thing. In an article subtitled “Don’t Call it Craft Barbecue” Daniel Vaughn predicted the future:

“The new region is the internet where ideas are shared internationally without delay. Online videos broadcast Texas barbecue techniques to Australia or Sweden or France, and the resulting barbecue creates a style of barbecue that crosses the traditional boundaries. It permeates big cities all over the world. We’ll always have our regional barbecue in the American barbecue capitals, but this new style is likely the future of barbecue in the places where smoked meats are just now taking hold.” 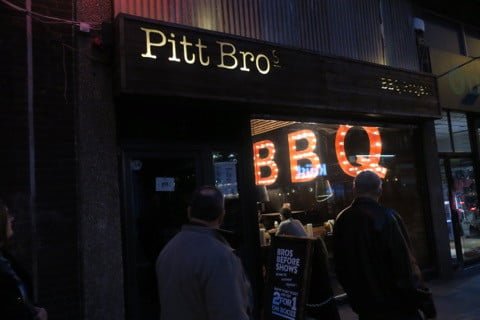 Its exciting to witness the early days of what may someday become the Irish barbecue boom. The challenge in new and upcoming barbecue markets like Ireland is educating the public. If your customers don’t know the difference between “gasser” barbecue and artisan pit-smoked cue, you are going to have trouble getting them to pay a premium for the real thing.

I hope to be on hand when they fire up the first honest-to-god log burner in Ireland.