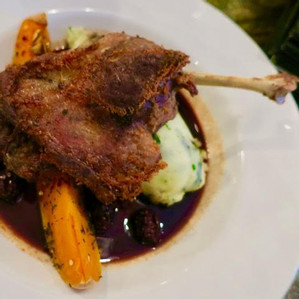 I might never have eaten chef Wayne Barren’s amazing crispy-skinned duck leg served with buttery kale colcannon and a chili roasted butternut squash topped with toasted squash seeds if it hadn’t been for the terrible traffic.

We were actually looking forward to dinner at Elaine Murphy’s Winding Stair, a restaurant in Dublin’s city center that’s famous for updated takes on traditional Irish cuisine. But we had chosen a Saturday evening filled with major events including a ball at Trinity and celebrations of the next day’s Dublin-Cork soccer match.

When the taxi company called to say that the taxi we had scheduled to pick us up at our temporary home in the Rathgar neighborhood wouldn’t be able to make it in time for our dinner reservation, I rudely berated the woman on the other end of the phone for her failure to perform her job. (Please accept my belated apology, ma’am. I was hungry.)

Partially recovered from my temper tantrum, I led our party of six on a forced march to the Bijou Bistro, a cozy-looking eatery we had spotted on trips to Rathgar village, a mere 5 minutes walk away. The Canadian hostess had to juggle tables to find a place to seat us, but she was very cheerful about it. Her extra efforts, a table by the window and a pint of Guinness improved my mood immensely.

We didn’t know what to expect from this spur-of-the-moment choice of restaurants—which made the artistry of chef Wayne Barren’s food all the more amazing. Daughter Julia, who was celebrating her birthday, swooned over Bijou’s melt-in-your-mouth braised lamb shanks which were served with minted greens, cauliflower cheese and caramelized onion mashed potatoes while Kelly dug into a hearty helping of baked salmon with mustard creamed cabbage, lentil sauce and crispy bacon. Daughter Katie the vegetarian, was well satisfied with a vegetable parcel with dilled yogurt.

Ten year-old Ava and eight year-old Robert gave two thumbs up on the three course kid’s meal—they got garlic bread for an appetizer, sliders assortment for the main and ice cream for dessert. The waiter stuck a candle in a bowl of sticky date pudding and we all sung Happy Birthday to Julia to the chagrin of those unfortunate enough to be seated at tables nearby. 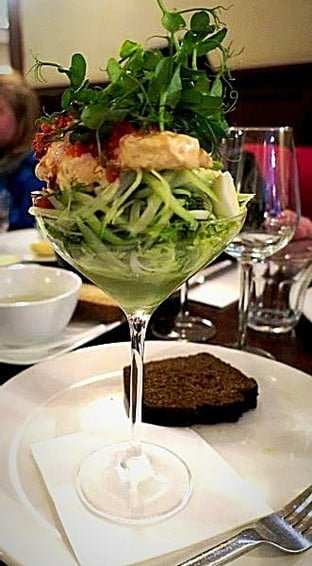 The birthday dinner was so good that when Kelly’s brother and his two kids stopped by to visit, we took them to Bijou Bistro as well. On that visit, I sampled the amazing Bijou Prawn Cocktail.

The reimagined shrimp cocktail started with a nest of celery, scallions and cucumber liberally dressed with guacamole and red pepper salsa topped with some of the largest shrimp I have ever seen all anointed with smoked paprika mayo. The only thing it had in common with the shrimp cocktails of my youth was the stemmed glassware it was served in.

Baby Gem Salad with green beans, marinated tomatoes, guacamole and feta was another refreshing appetizer we tried. I regretted missing out on the salad of fresh figs, Toonsbridge mozzarella and Serrano ham–it sounds awesome. 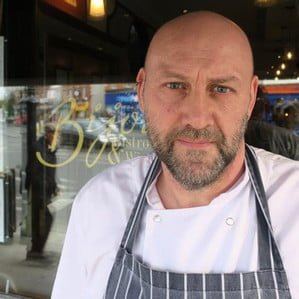 We were a little disappointed by the pan-fried hake with asparagus and crispy kale. But I must confess that hake, an extremely bland fish, is not among my favorites no matter how it’s cooked.

Another entrée, the 8 ounce Black Angus filet, was perfectly grilled and nicely presented with grilled field mushrooms, red wine onions and a Bearnaise sauce on the side. It was good, but not great, but that’s my prejudice speaking. I find Irish pork, lamb and poultry vastly superior to what we get in the States. But USDA Prime beef is hard to beat. These personal preferences were no reflection on the skills of the chef.

Chef Wayne Barren has elevated the food at this chic little eatery in Rathgar to the next level.

Barren began his career with a stint at Aubergine, a Michelin one star restaurant in Munich, and went on to work across the Continent. His training and discipline are apparent in the masterful command of the basics he brings to the kitchen of Bijou Bistro.

The skin on the duck leg is impossibly crisp and the succulent lamb shank is braised to the very edge of falling apart. These traditional classics served with upscaled takes on Irish side dishes and sauces with lots of local ingredients are a splendid take on the “new Irish cooking.”