It’s a little bit shocking to see a big Louisiana-style seafood boil in Western Ireland, but lo and behold!

I am constantly amazed by the bounty of Irish ingredients

This cooking project got started when my daughter Ava came home raving about a Vietnamese-Cajun Seafood Boil she had the Crafty Crab restaurant in Houston over the summer. It wasn’t the first time she had eaten a Vietnamese-style Cajun seafood boil, but it was the first time she’d had one with Alaskan king crab legs in it. 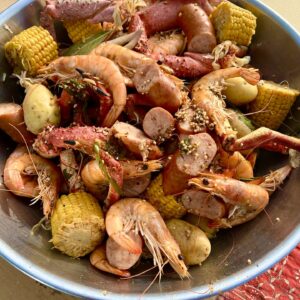 Viet-Cajun is a multicultural crossover cuisine that began to emerge when Vietnamese immigrants came to the Gulf Coast region in the 1970s after the fall of Saigon.

Vietnamese cooks adapted the traditional Cajun crawfish feast to their tastes, adding lemongrass, ginger and Asian ingredients to the boiling pot. They also created spicy dips to increase the heat and flavor. And instead of limiting the choice to crawfish, they added other shellfish to the menu. Along with Gulf blue crab, clams, and lobster began showing up on menus. When seafood boil joints opened in Vietnamsese communities on the West Coast, Alaskan crab began appearing in the boiling pot. Eventually the crawfish became optional. 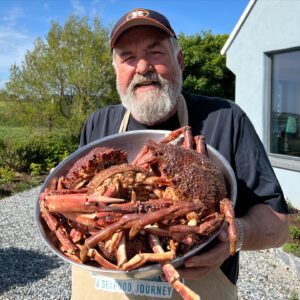 Ava wondered if we could do a Viet-Cajun boil at home in New Quay. It was the sort of challenge that I relish—one that ends with me eating a lot of tasty seafood. I already had the giant boiling pot, I had the spices, I had the oversize metal bowls, and I knew exactly where to get the seafood.

Gannet Fishmongers started out as a seafood stall at the Galway Saturday Market in 2004 and went on to become one of Ireland’s busiest seafood retailers. The retail store is located in Ballybane Center about a half hour drive from my house. They sell 5 kilo boxes of frozen white shrimp from Ecuador that looks and tastes exactly like shrimp from the Gulf of Mexico.

“Yes, we have Alaskan king crab,” the fishmonger on duty at Gannet told me. “But you won’t like the price.” The amount I would need for a big boil would set me back over a hundred quid.

Instead of the Alaskan stuff, he recommended “Irish king crab.” Irish spider crab looks like a slightly smaller version of king crab and tastes very similar. And it sells for a fraction of the price.

You see a lot of brown crab (or stone crab as it’s known in the U.S.) on the menus at Irish seafood restaurants, but very little spider crab or velvet crab.

(Kudos, by the way,  to restaurants like Oscar’s Seafood Bistro in Galway that are cooking delicious dishes with these and other underutilized species.) 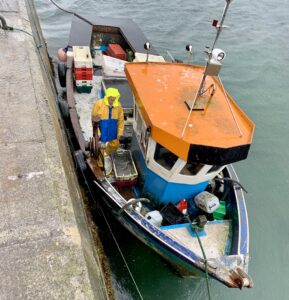 My local New Quay lobster fisherman, Gerry Sweeney, also harvests spider crabs. There is so little demand for them in Ireland that the Sweeneys ship all of their spider crab and velvet crab to Spain. But if you request some spider crabs or velvet crabs, the Sweeneys will gladly bring it to the dock for you.

Why don’t Irish people eat spider crabs? Gerry Sweeney told me that while Spanish people love to sit around picking the meat out of the crabs and eating with their fingers, “Irish people aren’t much for that sort of thing.”

There are countless recipes for Cajun and Viet-Cajun seafood boils on the web. Most start with package of boiling spices. In Louisiana and Texas, you can buy Zatarain’s boiling spices in any grocery store. Some folks use Old Bay Seasoning (not me, I don’t like the smell of cloves in my seafood).

I added lemon, fresh lemongrass, and chunks of ginger for the Vietnamese flavor. But you don’t have to make it complicated–the basic idea is to cook the seafood in a spicy boil. Just don’t skimp on the spices.

The cooking time of the crabs depends on size. I boiled the crabs by themselves until they turned red, then broke up the legs and threw them back in the boil. (I cut the bodies into quarters, wok-fried them in a little garlic butter, and served them on the side.)

Twenty minutes from dinner time, whole new potatoes, and sausage chunks go in. (I buy kielbasa at the Polish grocery, English or Irish sausage won’t work because of the bready rusk content.) Corn-on-the-cob sections next.  Clams or mussels are nice too. The shrimp goes in last because you don’t want to overcook it.

In the Cajun version of the boil, that’s the whole process. You remove the mixture from the liquid and dump it steaming on top of spread out newspapers on a picnic table. Everybody sits around the table, munching, peeling and picking. At Cajun joints, there is often a hole in the middle of the table with a rubbish bin underneath for the shells and cobs.

Vietnamese restaurants go one step further–they combine the boiled seafood with your choice of sauces before serving. Garlic butter sauce is one of the most popular. The boil is dumped into a large mixing bowl (or a plastic bag) and the sauce is ladled over it, then the seafood is stirred or shaken to distribute the sauce. We used a big steel mixing bowl and lots of garlic butter spiked with hot pepper sauce.

The flavors were sensational! Hot and spicy, deliciously succulent, and extremely messy to eat. Which is why Louisiana boils are typically eaten outdoors. In the indoor Viet-Cajun restaurants, lobster bibs and plastic gloves are commonly provided.

We ate our boil at the picnic table with lots of cold beer.

I don’t expect the Irish-Viet-Cajun seafood boil to catch on anytime soon. But we sure did have fun eating ours!

By 2020, some 70,000 people of Vietnamese descent lived in coastal Louisiana and East Texas–there are many reasons why they thrived there.

As the Mississippi river reaches the Gulf of Mexico, it fans out into a system of distributaries, wetlands and coastal marshes. To Vietnamese immigrants, it looked a lot like the Mekong Delta. Louisiana and Vietnam also share hot and steamy weather and a French colonial past. Rice farming and shrimping are occupations common to both places. The hot and spicy cuisine of Cajun country with its focus on seafood, rice dishes, strong coffee and French bread sandwiches all seemed familiar.

Every spring, around the massive Atchafalaya swamp in Western Louisiana, wild crawfish are harvested.  The Vietnamese immigrants loved the communal crawfish boils–a group of people seated around a big pile of seafood in the middle of a table resembled Vietnamese crab-eating traditions. Soon the immigrants were adapting the Cajun style.

Just after the year 2000, Vietnamese restaurants with names like Cajun Corner began popping up in Houston’s Chinatown—they served seafood boils to mostly Asian customers. But folks from all over Houston quickly discovered the new joints and joined in. The trend soon spread to major cities across the rest of the United States–and the rest of the world. Around 2015, Nickie Tran, a Saigon native who grew up in Houston, returned to Saigon and opened  Cau Ba Quan, the first Viet-Cajun restaurant in Saigon.

In 2018, Trong Nguyen, the founder of Houston Viet-Cajun restaurant, Crawfish & Noodles, was nominated for the James Beard Award, Best Chef: Southwest. Viet-Cajun has gone from a novelty to a respected branch of Asian-American cookery.