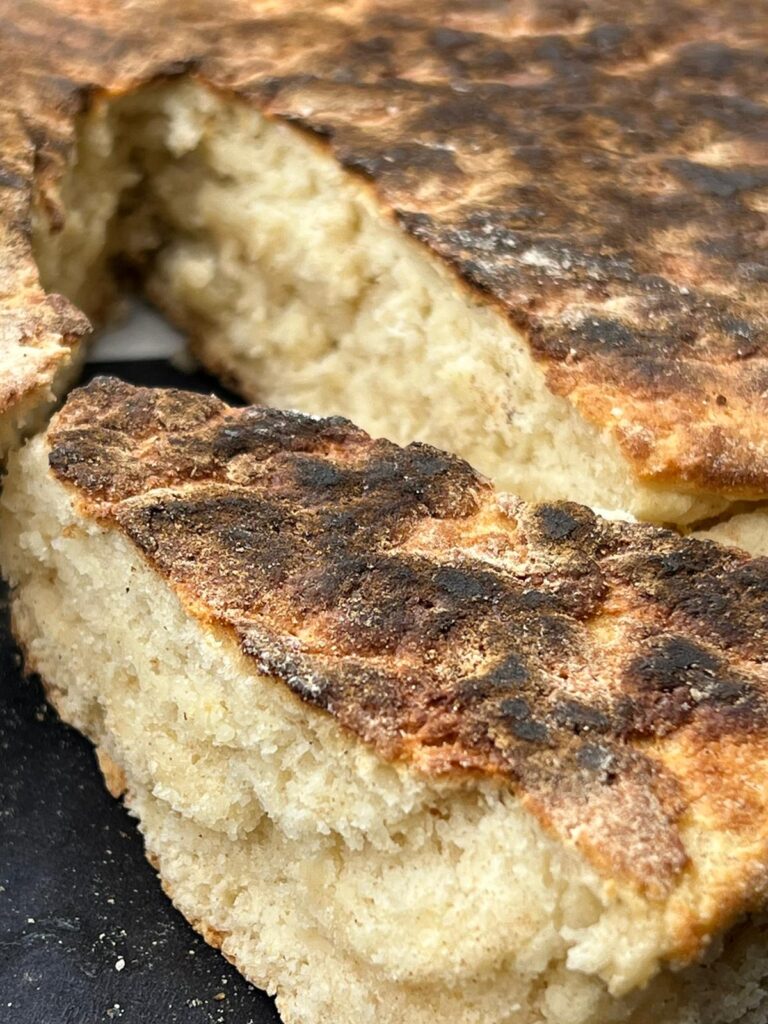 Have you ever tried griddle bread?  Most Irish people’s grandparents or great-grandparents grew up on the stuff. It’s really just a flatter form of everyday Irish soda bread, but it’s cooked in a flat pan or griddle. In the old days, the griddle was suspended over an open hearth. The key difference between griddle bread and regular baked soda bread is its dusty, smoky crust, just on the right side of burnt.

Of course, this kind of bread became obsolete with the invention of the electric oven.

So I was intrigued to hear that a new Dublin microbakery was reviving the farmhouse tradition. The Blackpitts Bakery is selling limited amounts of griddle bread as well as artisan pastries to some cool coffee shops around the city. Blackpitts’ griddle bread has been getting lots of attention online and deliveries are snapped up by its many fans. A serendipitous encounter in my local pub introduced me to the owner of The Blackpitts Bakery, Mags Lynch and I arranged an interview. 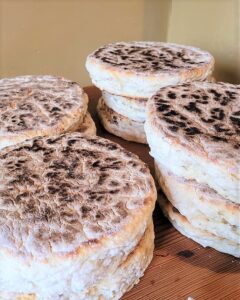 When we met again, Mags brought some griddle bread along with her and we cut some slices. The bread is dry and charred on the outside with a craggy crust, floury and spotted from the hot pan. The crumb inside is somehow both denser and fluffier than regular soda bread, soft and moist, almost cake like. It’s perfectly salted, with a slight tang from the buttermilk.

Mags brought along some butter and jam. I didn’t even bother with the jam as the slices of griddle bread and butter were delicious all by themselves.

Ireland’s legendary soda bread comes in many shapes. There is the pan-shaped loaf, the ubiquitous round cake with a cross on top, and bread divided into four quarters or “farls.” Griddle bread is a seldom seen variation.

In spite of its reputation as Ireland’s traditional bread, soda bread didn’t become part of the Irish diet until the 1840s or 50s onwards when baking soda first became commercially available. Bicarbonate of soda mimics the aerating effects of yeast when it’s mixed with an acid–such as the lactic acid in buttermilk. Bread soda caught on because it was well suited to the softer Irish flours which have less protein and gluten than ideal yeast bread flours.

Before the arrival of electric ovens, the open fire was the main method of cooking in Irish homes. Ovens were sometime improvised with an iron lidded pot, called a bastible. The pot was placed on top of fire ember and covered with more embers, creating heat from all sides to bake the bread. The griddle was an even simpler method. The dough is shaped into a fat flatbread which is cooked on one side before turning over. It is generally made with white flour and takes about twenty minutes to cook. 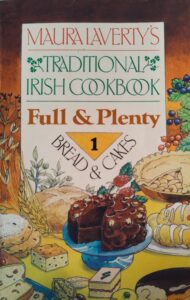 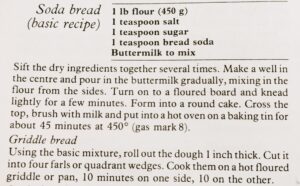 Mags Lynch makes her griddle bread on a flat pan on the hob rather than over an open hearth but it retains the delicious smokiness nonetheless. She operates The Blackpitts Bakery from her home in Dublin 8, baking small batches of griddle bread and other tasty bakery goods and delivering them by bicycle to various outlets nearby. She’s part of the microbakery wave, small-scale and from-home bakers who started selling to neighborhood markets and shops when Covid disrupted supply chains.

Mags comes from a baking family. Her kin have run Lynch’s bakery in Listowel in County Kerry since it was set up by her grand aunts in the 1930s. It was a traditional Irish bakery, selling all sorts of bread, soda bread, and mixed trays of buns. When she was growing up, she says, “Every decent town all over the country in the seventies and eighties had such a bakery.” They had two delivery vans on the road at one point, distributing the local sliced pans, cakes and buns to shops all around the area.

This family background was a big influence on her future career. She studied bakery management and spent ten years working for chocolate company Lir. In 1996 Mags left Lir to set up cake and dessert business Couverture with her sister Ger. After many years and many expansions, she decided to take a step back and left Couverture in April this year.

Mags is not fond of being idle, so wasn’t long before she was cooking up something new from her home kitchen in Dublin 8. It started from a relationship with Marlowe & Co. She started supplying the neighborhood grocery shop and café with Danish pastries and the current obsession of the Irish bakery world, Portuguese pasteis de nata.

So what made her think of reviving griddle bread ? Mags says she wanted to come up with something unique. She had memories of seeing griddle bread made on the hearth as a child when visiting farmhouses on summer holidays with relations. Mags’ brother Paddy had started experimenting with griddle bread which had reminded her of how good it is.

“I wanted to make something local people would appreciate and that might create a bit of a buzz”. 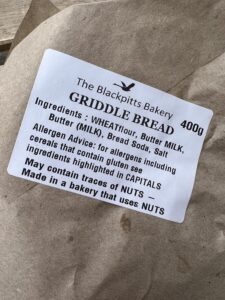 And it certainly has. While the pastries are selling well, it’s the griddle bread that’s been getting the most online attention. The various shops she supplies to regularly sell out. The bread is often pre-ordered by customers before it even arrives.

Her recipe is a simple white soda bread which starts with a dry blend of flour, salt and bread soda, through which she mixes a bit of butter and wets with buttermilk. She has a video showing the method on her Instagram. Griddle bread is rarely made with wholemeal flour. As Mags says, “it’s nicer white”. There’s a little more moisture in the griddle bread compared to oven baked. She keeps it simple and there are no additions of currants or other extras that you sometimes get with soda bread loaves.

Mag says that griddle bread was never a commercial thing, it was always made at home but that the tradition is dying out.

I asked her if people tell her it reminds them of something they had when younger? “All the time, all the time”, Mags says. She has been “surprised and delighted with the popularity. It’s too busy for one person, I will need some help in the Autumn”. At the same time, she says she doesn’t want it to go too crazy.

We talked a little about the changing nature of bakeries in Ireland. What led to the decline of the simple and traditional Irish bakeries in towns all over Ireland from their heyday in the 1970s and 80s? Mags puts it down to a bread price war in the late eighties and early nineties, mainly driven by the competing supermarkets Dunnes Stores and Quinnsworth (later bought by Tesco) who were selling cheap sliced pans and squeezing smaller bakeries out of business.

Later in the nineties, the proliferation of par-baked continental bread brands such as Cuisine de France and in-shop bakeries were another nail in the coffin of the traditional Irish bakery. Mags said the urge to keep up with the times led many small-town bakeries down a fruitless path, “technology turned people’s heads. They took on a lot of products, bakeries got very complicated and inefficient”.

Mags thinks we might see a return to those smaller scale regional and town bakeries. “I think we need to see that. Communities love it as well, having a local bakery you can visit every few days”. She feels there is a renewed appreciation of traditional cakes and old-fashioned desserts, locally made rather than mass produced.

Currently you can buy The Blackpitts Bakery griddle bread in a few places around Dublin city: Marlowe & Co, Lilliput Stores, The Fumbally, and Daddy’s café in Rialto. The breads and pastries are made at Mag’s home every day and she delivers on her bike. You can check out the bakery’s website and instagram.

Caitríona Devery is a writer from Offaly but currently based in Dublin, with interests in food, culture, politics and environmentalism. Follow her on instagram: @everytreecat