#7: Alsatian Flammekueche from the Chez Louise pizza truck in Kilfenora- 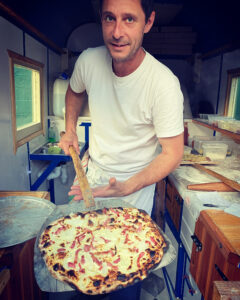 Chef Stephan is from Alsace and the thin crusts on his amazingly crispy pizzas come from his aunt Louise’s flammekueche recipe; hence the name of the truck. Last year, we asked if he ever made real Alsatian flammekueche. He said he often included it on the pizza menu.

This year, we got lucky and stopped by one day when he was making the Alsatian speciality.

Flammkueche, known as tarte flambee in French, resembles a bacon and onion pizza with a white cheese sauce. The tangy French fromage blanc resembles quark. The Alsatian-style pizza with the creamy topping is quite rich and absolutely delicious with a glass of Riesling or a cold beer–I had mine with a pint of Guinness.

Legend has it that flammekueche was originally made by Alsatian bakers to test the heat of their bread ovens. If the oven was at peak temperature, the thin crust would bake in just a minute or two with black char around the edges. It made its way into French cuisine during the pizza boom that began in the 1960s. Variations found in Alsace include Tarte Flambee Gratinée with added Gruyère cheese and Tarte Flambee Forestière with mushrooms.

Chef Stephan’s portable pizza stand is a converted horsetrailer with a wood-fried oven built in. The Chez Louise trailer parks behind Linanne’s Pub in the Burren town of Kilfenora on Friday and Sunday evenings in the tourist season.