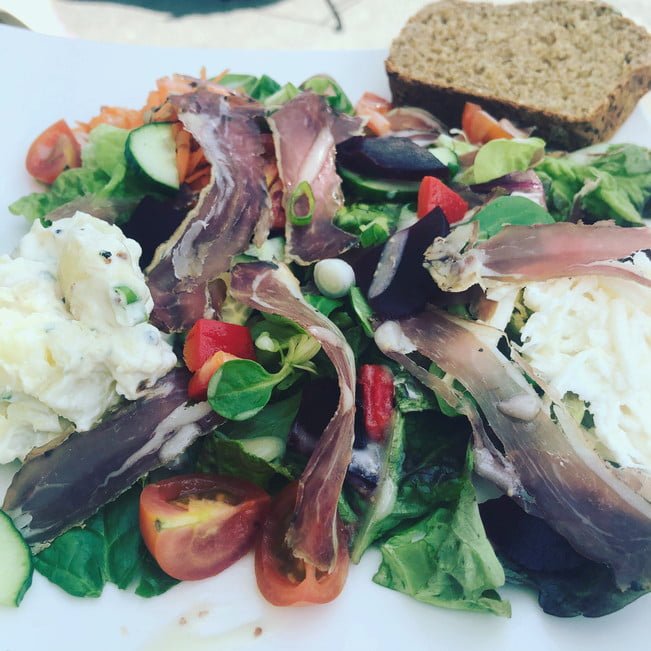 Oughterard is the gateway to Connemara on the road from Galway. Greenway Cafe on Main Street in Oughterard is a locavore hangout and hip coffee shop–I was lucky to get a tiny table on the sidewalk out front at lunch time. And I was delighted to find a menu item called “air-cured lamb salad” on the menu. It featured McGeough’s air-dried lamb.

McGeough’s butcher shop on Camp Street, around the corner and up the block from the cafe is famous for its Connemara Lamb–the unique mountain-grown variety of lamb has won its own EU designation. But McGeough’s is also famous for it air-dried meats, these are cured using the same process as Italian Prosciutto and Spanish Iberico ham. Foremost among them is McGeough’s unique air-dried lamb.

I had already stopped by the store and bought a 5 Euro package of dried lamb slices, but I hadn’t figured out what I was going to do with them yet. So the Greenway Cafe salad was a bit of a revelation: the crisp greens, sliced scallions, and cress turned out to be an ideal foil for the lamb. The dried lamb slices have a texture similar to Prosciutto with the same pleasant saltiness, but with the fuller, gamier flavor of lamb. The combination of crunchy bitter greens and unctous meat made for a wonderful salad. There was also a pile of slaw, a scoop of potato salad, as some brown bread to round out the meal.