Lighter than a breakfast roll but more substantial than a croissant, the cheese and ham-filled hot pastry called a jambon is my recommendation for an Irish fast-food breakfast.

Jambon means ‘ham’ in French, it’s also Irish shorthand for ‘panier jambon emmental,” or “ham and emmental cheese bread.” I’m not sure how popular these savory pastries are in France, but they are one of the stars of the Irish retail mini-bakery. If you’re traveling in Ireland, you can’t avoid these ubiquitous little in-store bakeries and the hot food counters that grew up around them. They are at the center of the everyday Irish food scene. 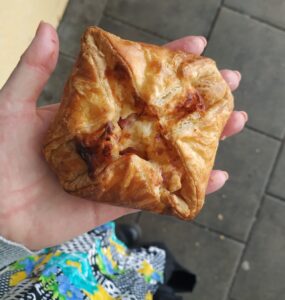 The trend began around 30 years ago when petrol stations, convenience stores and smaller supermarkets across the land were first equipped with high-tech push button bakery ovens. Every morning, they bake fresh croissants, baguettes, mini-baguettes, and pastries from frozen par-baked dough which is conveniently supplied to them by industrial bakeries.

The fresh baguettes and croissants then make it possible for the store’s hot food counter to turn out tasty made-to-order hot and cold deli style sandwiches. These, along with the baked goods and additional previously frozen items like sausage rolls and lasagna, make up the miniature deli counter.

A Irish hot food counter is as good as the cook in charge–seldom exceptional, always affordable, and occasionally delicious.

The Frenchified fast food now found at the petrol station became popular during the Celtic Tiger economic boom of the late 90’s and early 2000’s, when disposable income increased and people started to spend a lot more time in their cars. This type of casual, ready-to-eat, takeaway food filled a niche in the Irish market at a time when quick breakfast and lunch options were few and far between. Hot food counters popped up all over the country, revolutionizing the way Irish people eat. 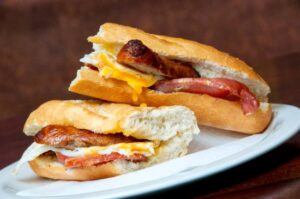 Warm, fresh-from-the-oven croissants were an instant hit with takeaway coffee customers. But it was the fusion of French and Irish cuisines called a “breakfast roll” that became the breakthrough hot food counter breakfast. (We’ll cover the “chicken filet roll,” the runaway lunch hit, in another post.)

A favorite of truck drivers and construction workers, the hearty, all-inclusive, customisable “breakfast roll” contains as many items of a “Full Irish Breakfast” as desired stuffed in a fresh baked “petite pain,” or demi-baguette.

And for those whose appetite for breakfast is less than gargantuan, there’s my favorite, the jambon, or “ham and cheese basket” as they were called when they were first introduced. A jambon resembles a Danish pastry: a buttery puff pastry square with the corners folded in. But instead of a sweet fruit filling, its stuffed with a rich and savory bechamel sauce flavored with Emmental and chunks of ham.

When you get a well-executed jambon, the flaky pastry is buttery and the bechamel has a subtle wobble to it. When jambons are left too long under hot food counter lights, they tragically dry out. Nobody likes a desiccated jambon. For this reason, I wouldn’t advise buying a jambon after lunch, unless you’re really stuck.

What’s so good about jambons? One key aspect is that they are the perfect modular snack. One jambon is satisfying but won’t leave you stuffed. If you’re hungry, just have two. They’re crispy on the outside, soft and squidgy on the inside. They’re savoury, cheesy and gooey and feel somehow indulgent even though they only cost €1.50.

The combination of salt and fat also makes them the perfect hangover mitigant. Their omnipresence in hot food counter menus means that you’re never very far from a jambon, which can be reassuring. My favourite jambons are the ones from Centra, or at least the Centras near me, but you will find them in most places that have a hot food counter.

After years of early morning jambon “research,” I started to wonder where they came from. A little digging determined that the origins of the jambon are intertwined with the introduction of compact bakery ovens into Irish food stores in the 1990s.

Irish in-store bakery brand Cuisine de France was the first and for a long time the biggest player in the par-baked goods game. Established in 1989, Cuisine de France’s key move was to install in-store ovens across the country. Once the ovens were in, the baking company supplied these retailers with an endless stream of frozen ready-to-bake products.

In the 90’s, anything French seemed fancy, so then-exotic croissants, baguettes (le petit pain!) and pastries appealed to upwardly mobile Irish consumers. The jambon first appeared around 1997 amidst Celtic Tiger Francophilia. Initially I thought the French connection implied that Cuisine de France invented the product, but this is not true. It seems the jambon for the Irish market was formulated and par-baked by Delifrance, a giant French/multinational ‘bakery solutions’ company.

However it arrived in Ireland, the jambon quickly became a standard item in the hot food counter repertoire. Other industrial bakeries got in on the game. One of the biggest producers these days is Irish company Golden Bake. Their marketing manager Síle told me that Golden Bake now make an estimated 80% of the jambons in Ireland, which they sell via wholesalers. 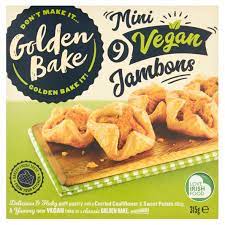 Golden Bake are experts in ‘laminated pastry’ which is a process to create thin layers of puff pastry dough separated by butter. How these layers separate when baked is critical to a good jambon. You can now also buy their jambons frozen to cook at home and they also make a vegan version.

Hard to believe that the mass-produced jambon of hot food counter fame has been around for a quarter century already, but it now falls into the category of foods that young Irish people grew up with. And familiarity has imbued it with a certain nostalgic appeal.

This has made it ripe for reinvention by chefs and bakers around Ireland, who have started to experiment with making their own spin on jambons with artisanal and high-end Irish ingredients – fancy jambons, if you will. 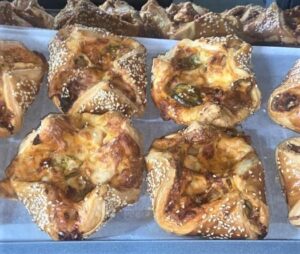 Jess Murphy of Kai restaurant in Galway is also a longstanding jambon champion. Kai often have a classic ham and cheese jambon on the menu. Jess compares it to mac and cheese in a puff pastry. In terms of ingredients she reckons “Durrus is the ultimate cheese for jambons because it has an amazing melting structure, but we’ve made them with Coolea or Knockanore or smoked Gubbeen. And we had a deluxe jambon at Christmas, cranberry ham and camembert”.

The jambon is a perfect example of how a mass-produced, industrial product can influence folk cuisine. Its original status as a humble, easily available snack invited creative chefs, bakers and home cooks to come up with their own versions. This reinvention with high-quality local ingredients has brought the jambon into the fold of Irish food culture.

And if you want to try making them yourself with shop-bought puff pastry, Niamh Fox has a great recipe in the Irish Examiner.

Caitríona Devery is a writer and radio broadcaster from Offaly but currently based in Dublin, with interests in food, culture, politics and environmentalism. Follow her on instagram: @everytreecat