Here in Western Ireland, it took me a long time to find the cuts of beef we use for “fajitas” or carne asada tacos.

If you are used to eating tacos all the time, Ireland takes some getting used to.

If you’re visiting, there are a couple of Mexican restaurants and maybe half a dozen decent taquerias in Dublin. My favorite is called Masa. Out in the country–not much to choose from.

The one place that served tacos in my neck of the woods, McHugh’s Pub in Ennis, has just gone out of business.

For a Tex-pat family that once lived on tacos, we have had to make some adjustments. Basically, we make our own tacos–several times a week.

Breakfast tacos are easy. Flour tortillas are available everywhere in Ireland and the bacon is available in endless variations. Bacon, egg, potato and cheese tacos on flour tortillas is a no-brainer.

Corn tortillas are another matter. There are lots of tortilla chips to be found. Corn tortillas in several sizes are made be Blanco Niño from freshly made masa in their factory in Clonmel. They are sold frozen and I buy them by the case.

I buy pinto beans, black beans, and other dried beans at the health food store. Smoked pork pieces to cook with the beans, like ham hocks, jowls, rib ends and so forth come from the Polish butcher shop–or the Brazilian store. I make big pots of beans and freeze them in smaller containers for a continuous supply.

I grow my own peppers, tomatoes and cilantro for salsas. But all that is available in the supermarket. There is even an Irish processed cheese that’s pretty close to Velveeta– It’s called Galtee.

I make birria de res from a beef roast called “Housekeeper’s Cut” which I braise in the slow cooker with chile sauce. I have lots of dried anchos, pasillas, and New Mexican chiles which friends have shipped to me. 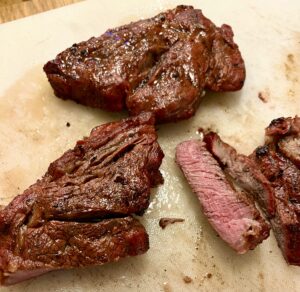 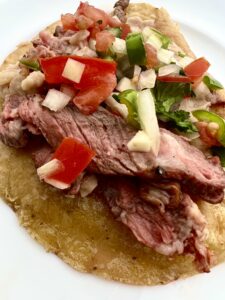 Such cuts of beef are easy to cook on the grill, but hard to come by way out in Western Ireland—which is ironic, since this is where most the famed Irish cattle are raised.

When I asked one Galway butcher if he had skirt steak, flat iron steak, or any other of the tasty cuts we use for fajitas or carne asada tacos back home, he replied, “Yes I have all of those!”

Where? I asked in eager anticipation.

“Right here!” he said pointing to a large pile of beef mince–the stuff we call ground beef in the states.

That might explain why almost every menu in Ireland includes a burger, but nobody eats tacos.

So imagine my surprise when I stumbled into the butcher shop at the Dunne’s Store in Jetland Shopping Center in Limerick and found every cut I was wanting–all in one place. 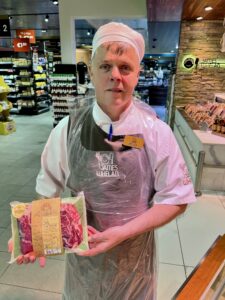 The young butcher named Declan assured me that all of the Whelan butcher shops inside Dunne’s Stores carried these seldom-seen beef cuts. Which is great since Limerick is an hour drive from my house, but there are several Dunne’s Stores closer by.

Even better, he told me that James Whelan Butchers maintains a website where you can order all kinds of meats delivered to your door.

It’s not like Europeans don’t know about these kinds of cuts–bavette is the French name for what we Texans call inside skirt steak. “Bavette frites” is a menu classic at bistros and brasseries all over France. And the famous French dish “steak frites” is almost always made with flavorful but chewy cuts like flat iron or hangar steak.

The Irish produce some of the best quality beef in Europe. French and German butchers and chefs love to work with Irish beef. But here in Ireland, steaks, roasts, and hamburger meat have been the extent of the selection in the meat case for a very long time.

Kudos to James Whelan Butchers for delivering to Irish consumers the beef cuts the rest of the world knows and loves.