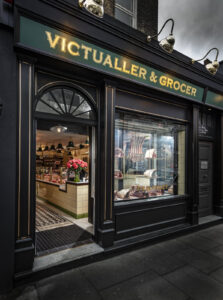 Call me a meat junkie, but there’s something about a restaurant attached to a butcher shop that makes my heart race. I have come across quite a few butcher shops with steakhouses in my travels. F.X. Buckley Victualler & Grocer on Pembroke St in Central Dublin is a brilliant example of the genre. The original butcher shop has spawned a whole chain of steak houses

The great barbecue joints in Central Texas were originally German meat markets. The butchers smoked up their leftovers and sausages at the weekend. The fare was so popular with migrant farm workers, the butchers added a few picnic tables where the working men could eat a BBQ lunch. That was the start of the butcher shop-eatery in Texas.

In Dublin, Buckley’s has a long history. Francis Xavier Buckley opened his first butcher shop in the 1930s. But his father, John Buckley had a chain of butcher shops that were mentioned by James Joyce in Ulysses. 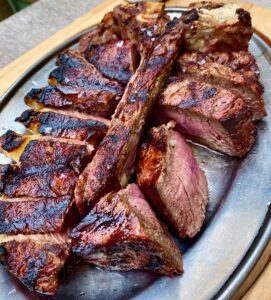 The menu at F.X. Buckley Steakhouse on Pembroke St. next to the original butcher shop is extensive. All of F.X. Buckley’s Irish beef is well-marbled  and dry-aged for 28 days, a rarity in this country.

Dry-aged beef loses as much as 30% of its weight, making the finished product a lot more expensive to produce than the “fresh” beef found in the average Irish butcher case. The fully developed flavor and tender texture of dry-aged beef are on another level entirely.

The choice of cuts and sizes of steaks on F.X. Buckley’s menu is a little daunting, but if there are two of you, let me recommend the porterhouse. It’s an oversize T-bone with filet on one side and New York strip on the other. My wife Kelly took the tenderloin side of the bone and I got the big strip steak portion on the other side.

Our steak was perfectly cooked to the requested medium-rare. It came with all four of the house steak sauces: piquant black pepper sauce, delicate Béarnaise, beefy bone marrow jus and (my favorite) classic garlic herb butter. I took turns dunking steak bites in each one.

There was also an array of the award-winning steakhouse’s terrific side orders including: rich creamed spinach, crispy beef dripping chips, buttery mashed potatoes, fresh green beans, roasted chestnut mushrooms and caramelized onions. To be honest, Kelly was more enthralled by the steakhouse sides than the steak. I was happy to trade her some of my vegetables for some of her meat.

The soft-lit dining room where we were seated was uber-comfortable. Don Draper from Mad Men would be right at home on the leather banquette knocking back a few martinis before lunch. We settled for a couple of glasses of top flight red wines. 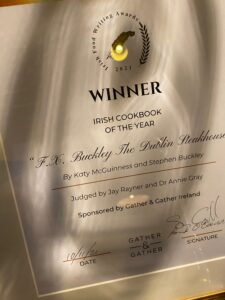 F.X. Buckley was recommended to me by my old friend Joe Shea and his daughter Caitlin. They told me it was a classic steak house that I had to try.

I was reminded of the place at the awards ceremony of this year’s Irish Food Writing Awards. I was honored to be a judge this year, my category was “Beer Writing.” The Irish Cookbook of the Year Award was won by a gorgeous tome titled, F.X. Buckley: The Dublin Steakhouse. Stephen Buckley was there to collect the prize.

One of the judges of the cookbook category was British food critic Jay Rayner who said in his judges notes that just looking at this cookbook made you hungry. Rayner was right. I leafed through the book and the day after the awards ceremony, I was at the front door of F,X, Buckley when it opened for lunch.

Can’t wait to go back.