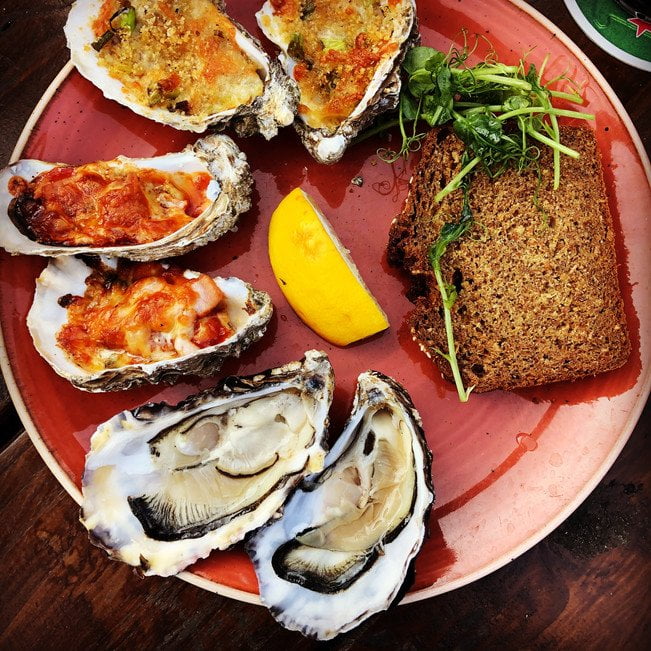 Au Naturel, Kilpatrick and Grilled, are the three offerings on the “Carlingford Oyster” section of the menu at PJ Ohares Bar. I ordered a pair of each. The half shell oysters were black-lipped and quite delicious, though still a little skinny in October. The Kilpatrick were over-the-top barbecued oysters with bacon, cheddar and hot sauce–my least favorite of the three. The grilled oysters with spring onion and garlic flavored breadcrumbs were sensational–I am trying to duplicate the flavor at home.

Until they were fished out, the oysters of Carlingford were considered by many to be Ireland’s best:

“In vain may the Parisian boast of his Cancale, the Londoner of his Colchester, or even our western shores of their green-finned Burrin, exquisite Pooldoody – who dare compare them to a rare Carlingford? (The Penny Journal, 1832)

Inspired by their romantic legend of the Carlingford oyster as recounted on a BBC radio broadcast, Peter Louet-Feisser began the revival of Carlingford oysters in 1974.  He created the Carlingford Oyster Company which buys seedling Gigas oysters from Normandy and raises them in bags set on trellises in the intertidal flats. The oysters are purified, packed and shipped directly to restaurants and customers from the shores of the lough.

Give them a try, should you get the chance.