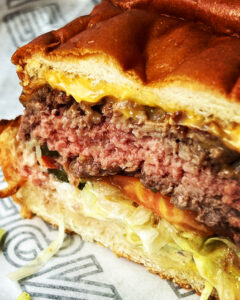 The big difference between average burgers and world class burgers is the quality of the meat and its fat content. The usual misconception is that lean ground steak makes the best burgers—it ain’t necessarily so.

Upscale American burger joints use mince made from fatty forequarter cuts like brisket and chuck. Typical lean to fat ratios are between 80-20 and 70-30. Except for the Kobe burgers, which are even fattier than that.

About their Dublin mince, Bunsen’s website says: “Having sampled all the major beef breeds available in Ireland, we settled on Black Aberdeen Angus supplied by FX Buckley. The beef is minced fresh on site every morning – a precise ratio of three different forequarter cuts.

“We add only salt and pepper seconds before grilling,” says the management. The result is a very juicy burger.

Bunsen is Ireland’s gold standard. It regularly wins top honors in Dublin newspaper surveys. In its 2020 “50 Best Burgers in Europe” issue, Big 7 Travel Magazine placed it in the Top 10. 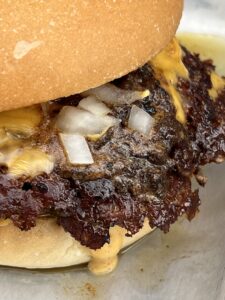 Dashburger is the hot new hamburger in town and its nothing like the others. This gorgeous creation features two crispy-edged meat patties fried well-done with lots of onions inside and topped with American cheese, lettuce, tomato served on a potato bread bun. There’s a satisfying crunch when you bite in.

This burger has made such an impact on the Irish burger scene that imitation “smash burgers” are popping up on menus all over the island.

As a sign in the store explains, the Dashburger is a variation on the Oklahoma Smash Burger. To make it, two balls of raw ground beef (mince) are placed on a hot griddle and topped a pile of onions.

Then the meatballs are smashed and smeared around with a special tool.

The meat is fried until very well done, seasoned generously, then flipped and fried on the other side. “It looks like a hamburger pancake,” several people have observed.

Dashburger departs from the minimalist Oklahoma smash burger concept with a few additions. The “special sauce” is a mayo base with a dash of mustard and ketchup and a pinch of spice, it is slathered on the top bun.

There is a new variation that comes with “mushroom miso butter” spooned over the finished burger patty–it adds a jolt of “umami” to an already over-the-top burger creation. 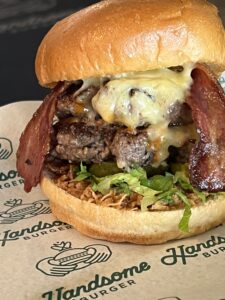 Two Galway lads with a passion for burgers started Handsome as a pop-up stall at markets and festivals. They were turning out hamburgers for the multitudes long before the current brick and mortar location in Galway’s Westend opened. Handsome Burger won Kepak’s nationwide “Best Burger” competition as part of the 2019 National Burger Day celebrations. They are currently experimenting with Limerick and Mayo pop-up locations. Locke Burger is the creation of a passionate young chef who started out with a food truck before opening the impressive location in Limerick City on George’s Quay in 2020. Dry-aged chuck and rib cuts from the finest Irish beef cattle make for a truly exceptional burger patty. 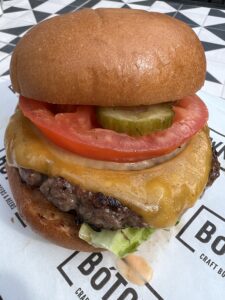 The signature BoTown burger is a solid, straight-ahead burger with a nicely cooked beef patty, cheese, tomato, pickles and a housemade burger sauce.

BoTown, is a Galway burger joint opened by two enterprising friends. They told an interviewer they got the idea for the place during a backyard barbecue. “Craft Burgers & Beers” is the company’s slogan and the restaurant relies on fresh local meat and produce to keep their quality high. 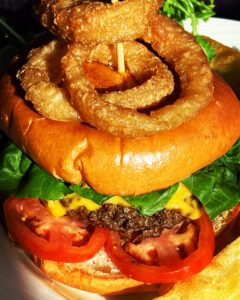 A massive half-pound patty with bacon, cheese, and a festive onion ring chapeau served in a hotel bar overlooking the town’s famous waterfalls. 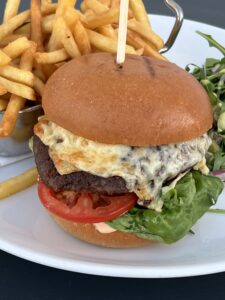 An excellent burger with quality toppings. The stout caramelized onions are a nice touch, not too soft and not too sweet. You’ll find this pub inside the Armada Hotel in Spanish Point. 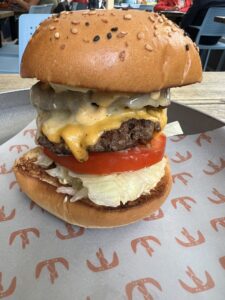 The Chicken and Beef concept restaurant has a very tasty (though oddly tower-like) burger. 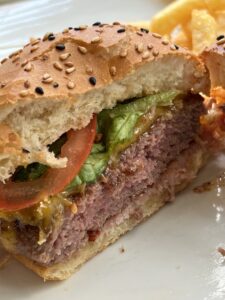 A surprising great burger in the heart of Ennis. Order your burger “not overdone” if you like it pink.

Culinary tourists are apt to overlook the hamburgers when seeking out the best in authentic Irish cuisine. But in truth, the lowly burger may be one of the best ways to sample the famous Irish beef.

Cattle raising is one of Ireland’s oldest agricultural traditions and the country is justly proud of its beef. Irish beef is one of the country’s biggest exports and it is well-loved across Europe.

But the Irish tend to like their steaks very lean, with no aging, cooked extra well done. There are a few exceptional steakhouses (like F.X. Buckley) that are worth seeking out. But at the average Irish restaurant, a medium-rare steak isn’t very tender.

On the other hand, minced beef (as ground beef is known in Ireland) is always tender and often extremely flavorful. And the new generation of upscale burger joints that are spreading across Ireland have raised the bar on burgers in general.