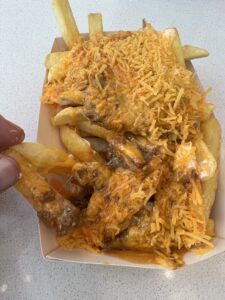 At the Galway Plaza SuperMac’s, my son Joe shoved a paper boat across the table and told me to try some “Taco Fries.”  The chips (French fried potatoes) were covered with what appeared to be chili con carne, topped with a mayo-based sauce, and sprinkled with shredded cheddar. It looked like a sloppy mess, but the flavor reminded me of Tex-Mex chili cheese fries. I added taco fries to my Eire-Mex hit parade.

An Irish friend told me that they were introduced to Ireland by the Abrakebabra fast-food chain in the 1980s and quickly became the favorite late-night snack for the young and inebriated.

Most of the chain’s locations are strategically open until 2 am. There are many hilarious accounts of drunken taco fries encounters on Yelp, if you’re interested. 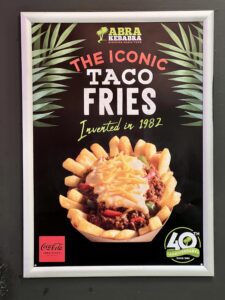 Posters throughout the store celebrated the 40th Anniversary of “The Iconic Taco Fries.” Abrakebabra introduced the doner kebab to the Irish fast-food scene when the chain first opened in the Rathmines nieghborhood of Dublin in 1982.

That they are publicizing the anniversary of “Iconic Taco Fries” in 2022 rather than the anniversary of the namesake kebab sandwich or the chain itself says a lot about the importance of these dressed fries to their business model. 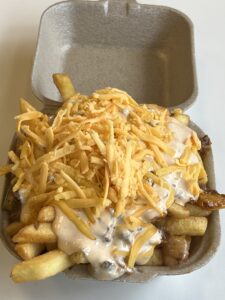 Dressed chips, loaded fries, or whatever they are called where you come from, are a fascinating subject. Cheap and filling, they were once associated with poverty. French fries and gravy were the filling for the “poor boy” baguette sandwiches served to hungry strikers during a 1929 New Orleans street car strike.

But dressed chips, in their many versions, have gone on to become a proper side dish.

Witness Canada’s beloved poutine, frites with cheese curds and gravy, served in restaurants all over Quebec. The dish traces its history back to the 1950s—several restaurants claim to have served them first.

England’s chips and curry started in the 1960s in fish and chips shops—a food company with a surplus of curry sauce claims to have inspired them. Chips and curry has long been England and Ireland’s classic late night “on the way home from the pub” snack.

Irish and English supermarkets offer “chip shop curry sauce” in bottles and DIY packets so you can make your own chips and curry at home. “Chip shop curry” has also joined “Thai sweet chili” and “prawn cocktail” in the exotic-flavored crisp (potato chip) category.

Tacos fries are actually one of many regional variations of dressed chips. Pizza chips are common in England, as are Chinese-style salt and pepper chips. The latter was the forerunner of the Irish Chinese menu item called a “Spice Bag,” which is a pile of chips and some chicken nuggets mixed with cooked onions and peppers and covered with a salty five spice blend.

Every dressed chips variation has its own loyal group of fans.

I asked son Joe if taco fries have become more popular than curry chips in Ireland.